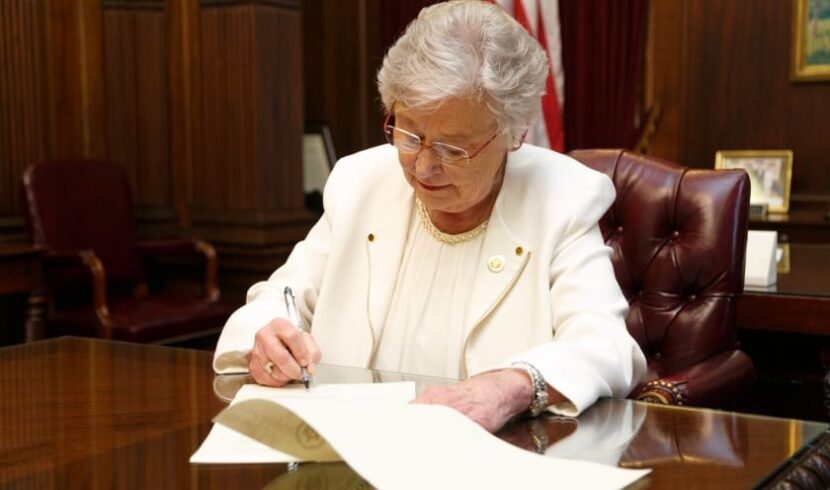 Gov. Kay Ivey today announced that a new prison in Elmore County will be built on private property near Tallassee. The announcement came a month after several state lawmakers and officials representing the county urged Ivey to consider vacant state property at an existing prison complex in the western part of the county.

In her announcement Friday, Ivey said multiple sites had been under consideration by the Alabama Department of Corrections.

“As stated in the request for proposal, the ADOC intends to enter into long-term lease agreements for these three facilities,” Ivey said. “As such, the confidential negotiation period will continue to ensure and secure the best possible value for the state. The ADOC anticipates construction to begin in early 2021 and that approximately 3,900 construction jobs will be created in Elmore County.”

“I am pleased with the forward progression of this pivotal initiative and look forward to financial close, which is anticipated to occur in late 2020.”

“Our group continues to believe that the state prison facilities need to remain in an area of the county where there is an acceptance of the correctional industry, infrastructure in place to support the correctional facilities, in place workforce to support the correctional operations, and land already owned by the Alabama Department of Corrections,” the letter said. “For these reasons, we respectfully request that your administration initiate the first steps in the Lands Sales and Leasing Act by ordering an appraisal of the parcel of land currently owned by the Alabama Department of Corrections north of the existing correctional facilities in Elmore/Speigner.”

The letter was provided to Alabama Daily News by Ivey’s office upon request.

“We’re in lockstep agreement that it makes the most common sense,” said Rep. Mike Holmes, R-Wetumpka, told Alabama Daily News. “… While we are grateful to get a new prison site anywhere in Elmore County, it seems to make the most sense for the state’s fiscal health to do it where we already own the land, already own the infrastructure and have good reception in that community.”

The early September correspondence was in response to Ivey’s announcement of the locations of two future prisons in Bibb and Escambia counties. She also said one would be in Elmore County, but didn’t give an exact site until Friday.

Ivey and the ADOC have been working since last year to hire private companies to build the three new prisons, which would then be leased back to the state and run by the ADOC. Tennessee-based CoreCivic will build the Elmore County prison.

Complicating the matter is the state’s Land Sales and Leasing Act, which would not allow the direct sale of the Elmore property to CoreCivic, but rather require the state to open up a bid process in which any other buyer could potentially upend the deal. Conversely, the privately-owned Tallassee land could be directly purchased by CoreCivic.

Chambliss said that from lawmakers’ perspective, there is a path for the state to sell the land to CoreCivic despite the complications.

“There may be reasons that may not be able to be overcome, but just from the outside looking in, it makes a lot of sense,” Chambliss said.

Chambliss said Ivey’s office received and had been “exploring the details.”

Requests for comment from ADOC were not fulfilled this week, but an ADOC spokeswoman said information should be available in the near future. Ivey’s office issued a press release with her decision on Friday afternoon.

A CoreCivic spokesman said the company could not comment on the ongoing procurement process and referred questions to the ADOC.

Last year’s request for proposals specified that developers had to locate and purchase land for the new prisons. Criteria for property included that it be near a population center that can ensure an adequate employment base and that it be “proximate to existing ADOC employee locations — estimated average 45-minute community for employees.”

That describes the Tallassee site, more than 300 acres of farm land and trees near Highway 229. A previous real estate listing advertised it for just over $1 million, though that number may be outdated now.

Tallassee is probably a good site, said Holmes, whose district includes the area. But it has to be purchased and infrastructure added.

“Somebody’s got to carry that cost, and that’s going to be the taxpayers,” Holmes said.

Chambliss said because information about the potential cost of building each new prison isn’t yet available, he can’t say whether using the Elmore site is cheaper.

The other developer is Alabama Prison Transformation Partners, a group including Birmingham-based construction firm B.L. Harbert. Ivey has said the state can spend $88 million a year leasing the prisons and pay for it by closing most of the state’s existing prisons.

Some lawmakers, mostly Democrats, have questioned the fiscal responsibility of spending that much money on 30-year leases and owning nothing when the leases end. But previous attempts to have the state itself build new prisons through a bond issue fell apart in the Legislature, in part because of fighting over where the job-generating prisons would be located and what current sites would close. Ivey has said up to 11 current men’s facilities will close.

Sen. Barfoot also represents the Tallassee area. He said he signed the letter because using existing land in Elmore makes fiscal sense and because almost all the feedback he’s gotten from Tallassee residents is that they don’t want a prison nearby.

“You have to listen to your constituents,” he said.

Tallassee Mayor John Hammock is not one of those constituents.

“I’ve been working on this for over three years with CoreCivic,” said Hammock, who is also superintendent of utilities in Tallassee. The proposed site is not in the city limits, but is within its utility district.

“I’m behind it 100%,” Hammock told Alabama Daily News. “It would be hundreds of jobs for the area.”

Hammock said he’s had hundreds of people, including business owners and home builders, tell him they want the prison in Tallassee.

“This right here is a clean industry, it is recession proof… it is COVID proof, it is pandemic proof,” Hammock said.

It’s also an opportunity for young people in the area to have a state job with benefits and retirement, he said.

“They might not have had the means to go to college, to trade school. This gives them another opportunity.”

Hammock also sees a contract for care with the future prison as a lifeline for the local hospital.

“Rural hospitals are struggling all across our country,” Hammock said. “Tallassee Community Hospital not only services Tallassee and Eclectic, but Macon County and Tuskegee as well. And, you know, we’re on the verge of closing our doors, we’re fighting and scraping, the way Medicaid billing is set up now, to even keep the doors open.”

The prison would be a revenue generator for the city’s utilities, would mean more money for local schools and better equipment for police and firefighters.

He understands there is some opposition, especially from landowners near the site.

A commitment to corrections

The Elmore site is several parcels of land that include the three prisons and surrounding farm land, some of which is currently leased out. State land records show more than 2,000 total acres.

“That’s what these lands were acquired for 40 or 50 years ago, the expansion of prisons and future prisons,” Chambliss said.

Both Staton and Elmore Correctional are medium security facilities. In July, they had 1,283 and 1,114 inmates, respectively, according to ADOC statistics.

Not far away is Ingram State Technical College, which provides job training to incarcerated adults.

Elmore County has a long history with the state’s correctional system. Alabama’s first prison, Wetumpka State Penitentiary, opened in 1841 with 208 cells, according to ADOC. Draper opened in 1939, Staton in 1978, Elmore in 1981. Tutwiler, the state’s women’s prison, is in Wetumpka in west Elmore County.

“(Elmore County has) had a commitment to the Department of Corrections in the state of Alabama for many many years and we want to continue that commitment,” Chambliss said.

The ADOC is Elmore County’s fifth largest employer, with 725 employees, according to the Economic Development Authority. The county school system is No. 1 followed by Wind Creek Casino.

Those ADOC numbers used to be higher. Draper was closed in 2018, but a portion of it was reopened in April as a COVID-19 ward for inmates.

While the prison in Tallassee would be profitable for utility providers there, losing prisons in Elmore would be a huge loss.

John Strickland, chairman of the Wetumpka Water Works board, said looking beyond Elmore for a prison site makes no sense.

“Why would we take public money, tax money, and go buy private land when you already own the perfect property?” Strickland told Alabama Daily News.

“All of the lines are there (at the current prison site), the pumps are there for the sewage as well,” Strickland.

Strickland said privately owned land near the current Draper site was looked at, but it would cost several million dollars to extend utilities to it.

Wetumpka Water Works has provided water service to ADOC prisons since the mid-80s and sewer service since 2010.

Wetumpka Water Works had to double its rates when it’s then-largest consumer, Russell Brands, closed in 2013.

If the water company lost the prisons it currently supplies, Strickland said another large increase would be put on other consumers.

Hammock in Tallassee and the advocates for the Elmore site agree on one thing: They want a new prison in Elmore County, wherever it lands.

Faulkner, the economic development authority chairman, said the mega prison will be a positive for the county.