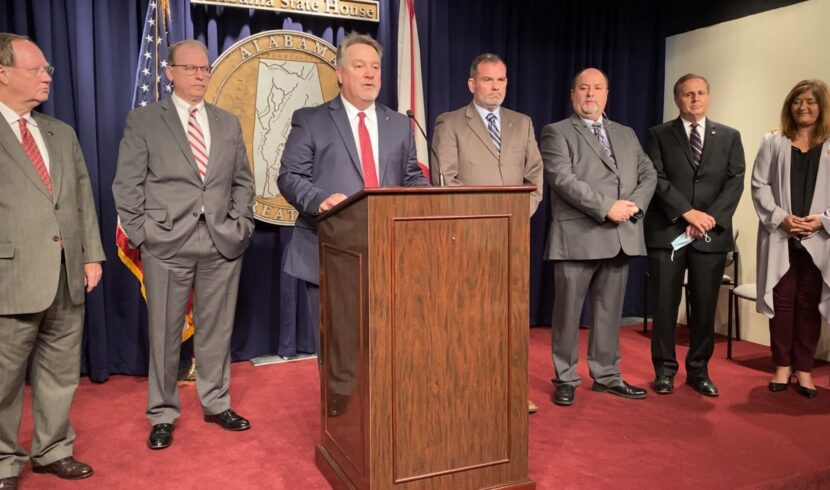 MONTGOMERY, Ala. – Republicans in the Alabama House of Representatives announced their legislative agenda Wednesday, prioritizing proposals to allow concealed carry of firearms without a permit, ban critical race theory in schools and cut property taxes for small businesses and farmers.

Dubbed “Standing Tall for Alabama,” the agenda includes a long list of topical issues sure to be discussed on the campaign trail, such as election security and abortion. Every legislative seat is on the ballot this year, with the primaries scheduled for May 24.

The majority caucus is also promising pay raises for teachers and state employees and bonuses for retirees.

“Our 2022 ‘Standing Tall for Alabama’ agenda is a broad-based plan that positively affects every Alabamian and makes our state an even better place to live, work, worship, and raise a family,” House Majority Leader Nathaniel Ledbetter, R-Rainsville, said during a news conference in the State House.  “While other bills will certainly be introduced, debated and voted upon during the 2022 session, Republican House members have unanimously pledged to prioritize and pass through our chamber the measures that are included in our agenda.”

Lawmakers for several years have attempted to pass legislation allowing citizens to carry concealed weapons without a permit, but those bills have stalled when met with opposition from law enforcement, particularly county sheriffs.

This year, Rep. Shane Stringer, R-Citronelle, a former law enforcement officer himself, said his “constitutional carry” proposal is gaining support partly because of a law passed last year that created a database of those not allowed to carry firearms.

“Last year, we passed the lifetime permit bill and in doing so we added the prohibited person database that will allow law enforcement to have up-to-date information on who the prohibited people are,” Stringer said. “That will give them the tool that they need for safety issues during traffic stops or domestic situations. In the past they have not had that.”

The agenda also includes a tax cut exempting the first $40,000 of business or personal property from state taxes. Legislation has not been introduced for the proposal, but the Republican leaders said it was aimed to help farmers and small businesses.

Republican leaders are promising to ban the teaching of critical race theory “and other extremist social doctrines” in state classrooms, and multiple bills have already been filed to that effect. Asked why a law was necessary considering the State School Board already instituted such a ban, State Rep. Randall Shedd, R-Cullman, said something more lasting is needed.

“They could have a meeting and reverse that at any time,” Shedd said. “If it’s in the code it makes it more permanent.”

Shedd also added that lawmakers would try to ensure there wasn’t confusion about what history can and can’t be taught as a result of the ban. State Superintendent Eric Mackey has repeatedly insisted that critical race theory is not taught in Alabama classrooms.

The agenda does not include a specific bill addressing abortion, such as a Texas-style law that would allow civil lawsuits to be brought against those performing abortions. A caucus spokesman said lawmakers are waiting to see how the U.S. Supreme Court rules on a Mississippi abortion law before taking next steps.

Likewise, there are no specific bills to alter election laws, but House GOP leaders said they would thwart any proposal brought by Democrats “to erode the state’s election integrity.” When asked, no specific Democratic proposal was named.

A spokesman for the House Democratic Caucus said its 2022 legislative agenda will be announced after the session begins.

The first day of the 2022 Regular Session is Tuesday. Gov. Kay Ivey is scheduled to give her State of the State address that night at 6 p.m.