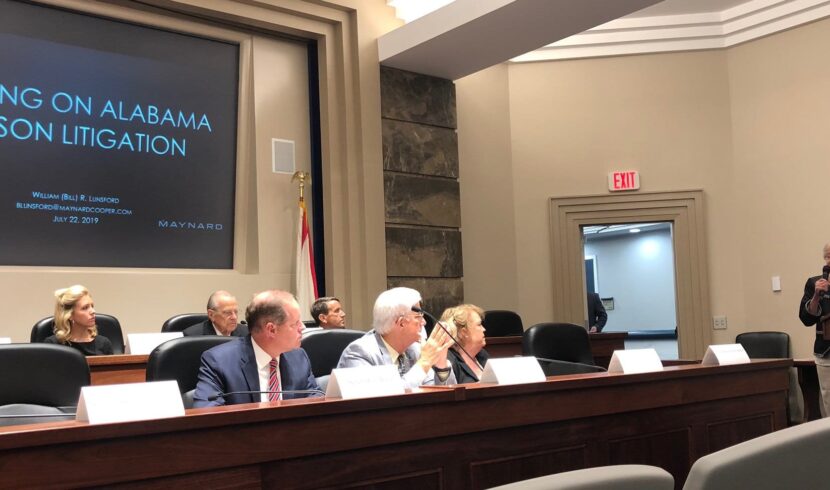 MONTGOMERY, Ala. (AP) — As Alabama tries to address its troubled corrections system, Gov. Kay Ivey convened a new criminal justice study commission Monday and said the state is working to avoid a Department of Justice lawsuit over prison conditions.

Ivey said the Governor’s Study Group on Criminal Justice, which held its first meeting Monday, will “study possible solutions for our longstanding prison problems.” The group will gather data on sentencing reform, recidivism and policies and make recommendations ahead of the 2020 legislative session.

The panel was convened as the state faces continued criticism of prison conditions, a federal court order to boost prison staffing and improve mental health care and the threat of a lawsuit by the Department of Justice.

The Justice Department in April issued a scathing report about what it called excessive levels of violence and inmate deaths in Alabama’s prisons for men. The report listed a chilling litany of examples of violence and said a critical staff shortage was one of the significant factors behind what it called unconstitutional conditions.

It also threatened to sue the state unless conditions improve. Ivey said Alabama is continuing negotiations with the Justice Department on how to address the concerns.

“We are working hard to avoid litigation. They have clearly stated they do not want to have to pursue that. My team is working with their team and we are making progress,” Ivey told reporters Monday.

Bill Lunsford, an attorney for the state, told the panel that the settlement discussions with the Justice Department have been fruitful, but noted they will be lengthy. Lunsford said that in the “best case scenario” a settlement agreement might be reached by the end of the year.

Corrections Commissioner Jeff Dunn said the department has taken some immediate measures recommended by the Justice Department. The department has conducted a series of searches to seize weapons, drugs and other contraband that fuel prison violence. The state has raised correctional officer pay in an effort to boost staff.

Alabama prisons in April held about 20,000 inmates in facilities originally designed to house about 12,400. That puts the state at about 165 percent of capacity.

Lunsford said he did not think the level of crowding violated the Constitution. Some lawmakers on the study commission questioned that assessment.

“I really do believe we have an overcrowding problem,” said Senate Minority Leader Bobby Singleton.
Ivey’s administration is exploring a plan to build four new prisons.

Alabama faces a separate directive to boost prison staffing under a federal judge’s order in an ongoing lawsuit over prison mental health care. A federal judge in 2017 ruled that the state has provided “horrendously inadequate” care to mentally ill inmates and ordered changes, including increasing staff. The Justice Department said it also wanted to see the state meet the staffing orders in that litigation.

“If anybody says we don’t have a problem, they are like an ostrich with their head in the sand. They are just not paying attention,” said Sen. Cam Ward, a commission member who also chairs the legislature’s prison oversight committee.

The Department of Justice findings grew out of an investigation started in 2016, although federal investigators have not completed one area of the probe. The Justice Department has an ongoing investigation related to use of “force and sexual abuse by staff,” according to a May court filing.