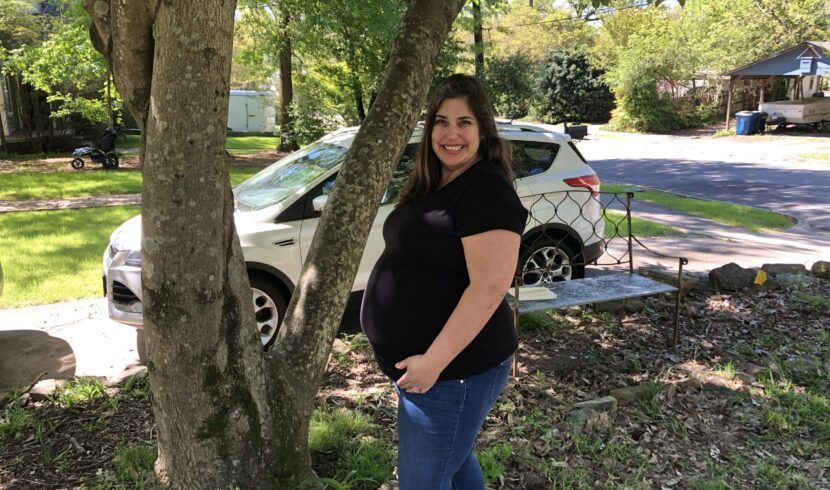 In her third trimester, Veronica Wehby-Upchurch is having to adjust her maternity plans.

Because of the coronavirus outbreak, what she thought the final weeks of her pregnancy and birthing plan would look like, could be much different.

“There’s a lot that’s unknown and it’s scary to think about that and how it might affect you and a brand new baby,” Wehby-Upchurch, of Birmingham, said.

The Centers for Disease Control and Prevention says it does not know if COVID-19 causes complications during pregnancy or how it will affect the baby’s health.

In the limited number of surveys of women who had COVID-19 while pregnant, none of the infants have tested positive for the virus after birth.

“We don’t have a lot of firm concrete data to say, these are the outcomes in pregnant women that get the coronavirus,” Dr. Jamie Routman, an OBGYN at Brookwood Women’s Medical Center, told Alabama Daily News. “So it’s hard to counsel patients and really reassure them with the lack of information that we have so far.”

The coronavirus has changed how hospitals are caring for their maternity patients.

A March 27 statewide public health order said all hospitals, nursing homes and long-term care facilities must cease all visitations, except for maternity and end-of-life situations.

Each hospital gets to define how many visitors are allowed to stay with a woman during labor and some are limiting it to only one other person.

This has made some expecting mothers make the difficult decision of choosing whether their partner, a parent or doula or other birthing assistant joins them in the hospital.

“We actually know that women have better birth outcomes when they have increased birth support. So, it’s less than ideal to take away any support, but people are just having to make really tough decisions right now based on the information that we do know,” Routman said.

Wehby-Upchurch had planned to have an unmedicated birth at a hospital with her doula and husband there for support. Now, the doula may not be an option.

As of Tuesday morning, there were more than 2,000 confirmed cases of COVID-19 in the state and 53 reported deaths. Jefferson County leads the state in virus cases.

Already, Wehby-Upchurch didn’t have a baby shower because of the risk of COVID-19 infection for her immuno-compromised brother and her 94-year-old grandmother who has COPD.

“It’s unfortunate but in the grand scheme of things I think for me, I’m most concerned about vulnerable populations catching this,” Wehby-Upchurch said.

State Sen. Larry Stutts, R-Tuscumbia, is an obstetrician who delivers at Helen Keller Hospital. He said mothers and infants are returning home quicker than normal due to COVID-19.

“I did two deliveries yesterday, and most people are deciding they would rather get out of the hospital as quickly as possible,” Stutts said. “Both of the patients that delivered on Tuesday went home Wednesday.”

So far, there have been no reported cases of a pregnant COVID-19 patient in Alabama, according to the Alabama Department of Public Health. If a COVID-19-positive patient were in labor, the delivery would occur in the isolated area of the hospital set up for COVID-19 positive patients, Stutts says.

The CDC issued guidelines in late March recommending that new mothers who test positive for COVID-19 consider temporary separation from their babies immediately following delivery, to try to prevent the newborn from getting the virus.

When asked if procedures will change as the number of COVID-19 confirmed cases increase, Stutts says there is a possibility.

“We have not had a [COVID-19] positive pregnant patient here yet but if we have a big increase in the number of positive cases that’s certainly a possibility, and so we have a plan in place for how we will manage that,” Stutts said.

Routman says that these protocols may be difficult for delivering mothers to accept but they are meant to ensure the mothers, their babies and the health care providers all stay safe.

“The decisions that are being made, although they are very difficult decisions, are being made to make sure that we can stay here for our patients and so there is a bed for them and a place for them to be safe and providers to take care of them,” Routman said.

Routman has another worry about new moms in a time of mandated social isolation. They may not have their typical support structure around them at home.

“It’s highly concerning to me from a postpartum depression standpoint when it comes to quarantining,” Routman said. “I mean, it’s the right thing to do from an infectious disease standpoint, but from a mental health standpoint, I think that could be pretty devastating.”

Routman said she is continuing to encourage social distancing to her pregnant patients and, if they can, for those who are about a month away from their due date to start working from home.

Jo Crawford is a certified professional midwife based in Birmingham who said she’s received an “enormous” amount of calls from expectant mothers now interested in home births.

“Some of them are people who had maybe previously entertained the idea of having a home birth before, but some are just saying they’re really scared and are just really freaking out,” Crawford told ADN.

Nancy Megginson is a certified professional midwife based in Tuscaloosa who also said she is receiving increased interest in her services, about half were coming from women already in their third trimester.

It’s unusual to see women change their birth plans late in their pregnancies, but because of COVID-19, there has been an increase in interest even from third-trimester women, said Chloe Raum, a CPM and president of the Alabama Midwives Alliance.

“Most people find what they’re comfortable with early in their pregnancy, so it’s really a shift to consider doing something different at that point,” Raum said.

Raum said she helped a woman give birth at home who changed her birthing plan when she was 33 weeks pregnant. There is not a state-mandated cutoff for when midwives can no longer accept a pregnant patient, but each midwife is different.

“It’s not something that can be done on a dime, not safely,” Raum said. “We need to make sure that we’re able to have the capacity to serve a mother and we have space in our schedule to serve a mother and then we have the resources on hand to serve. So in some respects, it’s not that there’s too late of time, but if those kinds of steps can’t be completed and she goes into labor, then we’re not prepared to take her.”

Alabama midwives can’t just serve any mother who comes to them.

Alabama’s CPMs can only attend to low-risk births and are required to transfer the mother over to an obstetrician if complications arise. They are not allowed to treat mothers expecting twins or triplets and can’t help women who have had previous C-sections and want to deliver vaginally.

Alabama’s Childbirth Freedom Act was signed into law in 2017, allowing the legal practice of certified professional midwives and establishing a state board. The board issued its first licenses in January 2019 and, now, 15 midwives are licensed in the state.

They are also ramping up their safety protocols and have been taking measures to protect the mothers from the coronavirus, like doing more telehealth communication and limiting in-person visits as much as possible.

“We’re even going as far as changing [clothes] before we even enter the house and then changing immediately when we get out,” Raum said.

But even if the midwives can’t serve the mother because she is too high-risk or doesn’t qualify, they still are able to consult them and put them in contact with other birthing assistance.

“Some of them just really needed somebody to talk too, and have another professional to help kind of ease fears and things like that,” Crawford said. “It’s hard because we know they’re all scared and we can’t help everybody.”

Whether it’s in a hospital or someone’s home though, health providers will continue to work through this pandemic.

“Our offices are still open and have a revised schedule, but they are not closing,” Routman said.

Editor’s note: for new moms and moms to be, Alabama has a great resource for making sure children receive proper care and nurturing, including during the coronavirus pandemic. Visit bornready.org.