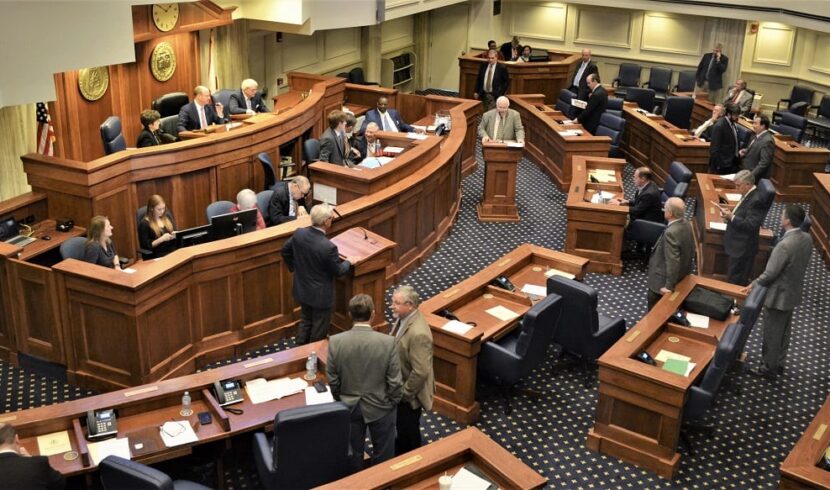 MONTGOMERY, Ala. (AP) — Alabama lawmakers are expected to vote Tuesday evening on a proposal to outlaw almost all abortions in the state, a hardline measure that has splintered Republicans over its lack of an exception for pregnancies resulting from rape or incest.

The bill before the GOP-dominated Alabama Senate would make performing an abortion at any stage of pregnancy a felony. The only exception would be for when the woman’s health is at serious risk.

“Our bill says that baby in the womb is a person,” said Republican Rep. Terri Collins, the bill’s sponsor.

Supporters said the bill is intentionally designed to conflict with the U.S. Supreme Court’s landmark 1973 Roe v. Wade decision legalizing abortion nationally, because they hope to spark court cases that might prompt the justices to revisit abortion rights.

Emboldened by conservative justices who have joined the Supreme Court, abortion opponents in several states are seeking to challenge abortion access. Kentucky, Mississippi, Ohio and Georgia have approved bans on abortion once a fetal heartbeat is detected, which can occur in about the sixth week of pregnancy.

Although the bill passed the House of Representatives 74-3, some GOP state senators have expressed discomfort that the bill doesn’t include an exception for rape.

“Overwhelmingly, the people out on the street I’m talking to, they are hesitant to put into law no exceptions,” Senate President Pro Tem Del Marsh said, recounting conversations with constituents.

The Senate fell into chaos last week after a hasty voice vote — pushed through in a less than five seconds— stripped a committee-added amendment to exempt rape and incest cases. Lawmakers adjourned for the day soon after.

An attempt to add the rape exemption is expected when the bill returns to the Senate floor Tuesday. Marsh said he is unsure how those votes would fall.

Republican Sen. Cam Ward said he also supports the exception for rape. Ward said he is haunted by stories of rape victims, including a woman who recounted being raped by a relative as a teen.

“I think the bill passes in the end. The close vote is on the amendment,” Ward said.

Other Republicans argued exemptions would weaken their hope of creating a vehicle to challenge Roe.

“We can’t say on the one hand that it is a life and then the other because of some very bad circumstances that’s it’s not a life. Either it is or it isn’t,” said Republican Sen. Clyde Chambliss, who is handling the bill in the Senate.

Collins, who had exemptions for rape in bills introduced in past sessions, said lawmakers could come back and add exceptions if states regain control of abortion access.

Lt. Gov. Will Ainsworth, who will preside over the vote and any attempt to amend the bill, posted a video on social media saying “abortion is murder” and opposing amendments.

Democrats plan to mount a filibuster against the bill but hold only eight seats in the 35-member chamber.

Democratic Sen. Bobby Singleton said the bill “criminalizes doctors” and is an attempt by men “to tell women what to do with their bodies.” He said the legal fight will cost money that the state could spend on other needs.

“Republicans call themselves fiscally conservative, but this is going to cost the state a lot of money to defend in court,” Singleton said.

One mile from the Alabama Statehouse — down the street from the Governor’s Mansion — sits Montgomery’s only abortion clinic. Because of its location, the clinic sees a stream of patients from Mississippi and the Florida Panhandle because other clinics have closed.

Clinic escorts wearing rainbow-colored vests use oversized blue umbrellas to shield patients from a sidewalk protester who shouts at women entering and exiting the clinic.

Kari Crowe, a clinic escort, has demonstrated at the Statehouse dressed as a characters from the “The Handmaid’s Tale,” which depicts a dystopian future where women are forced to breed.

She said the bills in Alabama and neighboring states are frightening.

“It’s horrifying my kids wouldn’t have the right or the ability to make choices for themselves if it ever becomes necessary,” Crowe said.