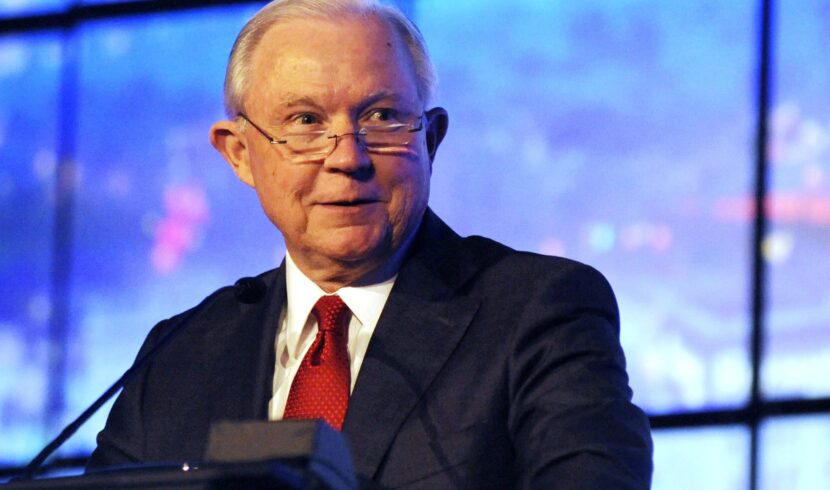 For the last two or three weeks, speculation has steadily grown that former U.S. Attorney General Jeff Sessions will enter the race to win back his old Senate seat. It started slowly at first, with just a handful of eager politicos bending my ear about what they were hearing. Now, it’s out in the open, with full on media reports about the speculation.

Politico and the Associated Press are reporting that Sessions is “strongly” considering entering the race. But the reports, just like the rumors, have one common denominator: no one claims to have talked to Jeff Sessions himself. It’s always “his people” or “someone in the room” or “a guy in Sessions world.”

I can confidently surmise that Sessions has at the very least strongly considered jumping in the Senate race lately, perhaps even to the point of putting polling in the field (his October quarterly FEC report doesn’t show any spending on such polling, but if he paid for it after the quarter ended, it would go on the next report). Part of the frenzy is due to the fact that qualifying for the 2020 Republican ballot ends in ten days. On Friday, Nov. 8 at 5:00 p.m., the GOP field for Senate will be officially set. Only Sessions himself knows if his name will actually be on the ballot.

But why would Sessions run and what would happen if he does?

Let’s start with the why. If he runs, what are the reasons behind it? A few motives come to mind.

First, I think it’s safe to assume that if he puts his name on the ballot again, he’s simply not ready to retire and hang up his cleats. More gas in the tank. More fire in the belly. That’s certainly understandable. On one hand, Sessions had an incredibly successful and impactful career in public service, from his early days as a prosecutor and election as Alabama’s attorney general, to his 20-year service in the U.S. Senate and ascent to Attorney General of the United States. Few, if any, Alabamians have ever been in that kind of rarified air politically. On the other hand, his career was ended abruptly and cruelly by the president he helped legitimize. He took it in stride, and even joked about it in a gallows humor sort of way. But, who could blame him, or his family, for wanting one more shot to finish out his career on his terms and solidify his legacy?

Second, if Sessions jumps in it must mean that he is dissatisfied by the current field of Republican candidates, or at least fearful of who the ultimate nominee will be. If you remember, this was the conventional wisdom amid the first round of Sessions Senate speculation earlier this year. With Roy Moore still polling pretty well back then, it was thought that there could be a “break the glass” scenario in which Sessions could swoop in and save the Alabama Republican Party from nominating Moore again. But, as things progressed, and the president tweeted, Moore’s candidacy never really took off. Instead, Tommy Tuberville is the frontrunner now. Could Sessions be sour on the former Auburn coach taking his former place in the august Senate chamber?

Consider that these two motives – legacy and dissatisfaction – could be intertwined. I don’t think it’s about personalities and resumes so much as it is about experience and effectiveness. Sessions spent 20 years in the Senate carefully honing a role advocating his unique brand of conservatism. No one in this current Senate field has really taken up that banner. For that matter, no one in the current Senate GOP Caucus has either. To Sessions, the legacy of his message could matter just as much or more than his personal one.

So how about the real question: what would happen if Sessions actually got in? Nine months ago, before any candidate announced for the Senate, I’d have told you that Sessions would clear the field and win his old seat back pretty easily. Come to think of it, I think I did tell some of you that. But as it stands now, that’s not exactly the case. In fact, I think Sessions would have a tough slog in this GOP primary, and there is one reason why: President Donald Trump. Is there doubt in anyone’s mind that Trump would lambast Sessions via Twitter on a regular basis? As one usually-in-the-know politico put it, “Trump would absolutely kill him. It would be ugly.”

To be sure, I am privy to some polling that shows Sessions maintains strong favorability among Alabama GOP voters. I’m sure Sessions, if he indeed has done his own polling, has seen the same numbers. Maybe he could keep them up somehow despite the tweet barrage. Maybe he could reach some kind of truce with Trump that would spare him the president’s wrath. I suppose anything is possible, but neither of those scenarios seem likely.

What is likely is that Sessions would face a tough election battle with candidates who are becoming well funded and well organized. What’s also likely is that his presence would totally upend the GOP race as it currently stands. In some ways, that kind of chaos would be fun to watch. However, think about this: which candidate has in the past benefited greatly from a fractured field of GOP candidates? That’s right. Roy Moore. In 2017, a split GOP electorate allowed Moore to rise above the rest and ultimately win the nomination. Right now, Moore only has 10-15% support, depending on which poll you trust. But, while other candidates would surely hemorrhage part of their support if Sessions got in, Roy Moore’s base would stay strong and dedicated.

I’d like to think that Sessions, ever the shrewd politician, has one more campaign in him. In some ways I think his return to the Senate chamber could be a welcome return to normalcy. When he’s at his best, there is hardly any better advocate for the conservative cause. But Sessions must be careful here. If I have it right and his reasons for running are to solidify his legacy and prevent a problematic senator, then entering the race could very well work against those ends.