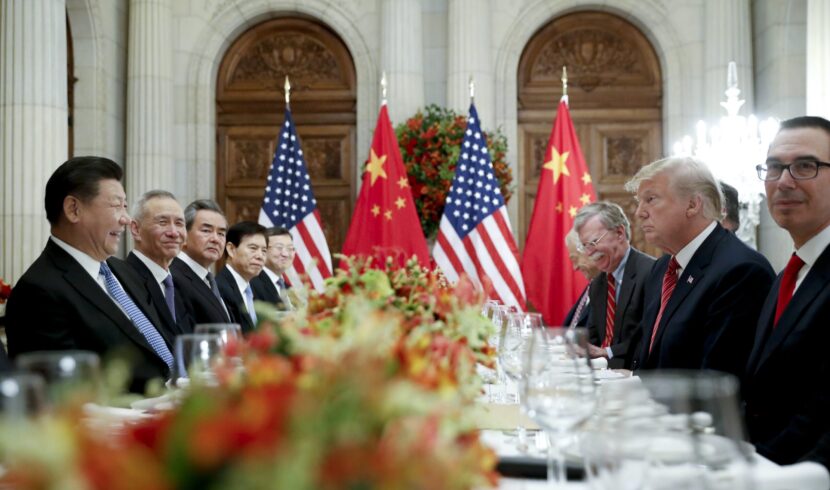 BIARRITZ, France (AP) — President Donald Trump on Sunday acknowledged having second thoughts about escalating a trade war with China, but the White House later reversed, saying the president was misinterpreted and that his only regret in hiking tariffs is that he didn’t raise them higher.

Trump faced a tense reception from his counterparts as they gathered in a French beach resort for the Group of Seven summit.

He suggested during a breakfast meeting with British Prime Minister Boris Johnson that he harbored qualms about the spiraling conflict. “Yeah. For sure,” he told reporters when asked if he had any second thoughts about ramping up tariffs on China after Beijing imposed new tariffs to retaliate against earlier tariff moves by the U.S.

Then hours later, White House press secretary Stephanie Grisham issued a statement saying the news media had “greatly misinterpreted” Trump’s response. Grisham said the president only responded “in the affirmative – because he regrets not raising the tariffs higher.”

Trump’s admission appeared at first to mark a rare moment of self-reflection by the famously hardnosed leader, and the later reversal fit a pattern of Trump recoiling from statements he believes suggest weakness.

Asked if he had any second thoughts about escalating the U.S. trade war with China, Trump replied: “Yeah, sure. Why not?”

When the reporter sought clarification by asking “second thoughts?” Trump said: “Might as well, might as well.”

Trump then said: “I have second thoughts about everything” when another reporter repeated the original question.

Trump had been trying to use the summit to rally the other leaders to do more to stimulate their economies, as fears rise of a potential slowdown in the U.S. before he stands for reelection in November 2020.

His summit counterparts are trying to convince him to back off the trade conflicts with China and other countries, seeing the disputes as contributing to the overall economic weakening.

The meetings come days after Trump responded to China’s announcement Friday that it would slap new tariffs on $75 billion in American goods with more tariffs of his own. Trump also issued an extraordinary threat to declare a national emergency in an attempt to force U.S. businesses to cut ties with China.

“Just to register a faint sheep-like note of our view on the trade war,” he told Trump. “We’re in favor of trade peace.”

Trump said he had “no plans right now” to follow through on his emergency declaration threat, but insisted he would be within his rights to use a 1977 law designed to target rogue regimes, terrorists and drug traffickers as the newest weapon in the clash between the world’s two largest economies

“If I want, I could declare a national emergency,” Trump said. He cited China’s theft of intellectual property and the large U.S. trade deficit with China, saying “in many ways that’s an emergency.”

Trump then entered the first official summit meeting, initially set as a discussion of foreign policy and security issues. But White House aides claimed he engineered a late change to the summit schedule, adding economic issues to the agenda.

White House officials said Trump planned to press leaders to do more to spur economic growth, as well as to open European, Japanese and Canadian markets to American manufacturers and producers. Trump has imposed or threatened to impose tariffs on all three markets in his pursuit of free, fair and reciprocal trade.

The meeting of the Group of Seven nations — Britain, Canada, France, Germany, Italy, Japan and the U.S. — in the beach resort town of Biarritz comes at one of the most unpredictable moments in Trump’s presidency, when his public comments and decision-making increasingly have seemed erratic and acerbic of late.

Only hours before his arrival in Biarritz Saturday, Trump reissued his threat to place tariffs on French wine imports to the U.S. in a spat over France’s digital services tax; the European Union promised to retaliate. That was the backdrop for an impromptu two-hour lunch with French President Emmanuel Macron outside the opulent Hotel du Palais.

Trump on Sunday disputed reports of friction with other G-7 leaders, saying he has been “treated beautifully” since he arrived.

But cracks emerged moments later after the French government said the leaders had agreed at Saturday’s dinner that Macron would deliver a message to Iran on behalf of the group.

Trump disputed that he had signed off on any such message.

“No, I haven’t discussed that,” he told reporters during a meeting with Japanese Prime Minister Shinzo Abe. “No, I haven’t.”

Macron, in recent months, has tried to play intermediary between the U.S. and Iran, as tensions flare over Iran’s nuclear program and the Trump administration’s increasingly restrictive sanctions on that country.

Meanwhile, Iranian Foreign Minister Jawad Zarif arrived in Biarritz on Sunday afternoon after being invited by France to the G-7 venue to try to ease tensions over its nuclear program, a senior French official said.

The official said the decision to invite Zarif came after the G-7 leaders, including Trump, met over dinner Saturday. It was unclear if anyone from the Iranian delegation would meet with Trump or U.S. officials at the summit.

Associated Press writers Kevin Freking and Deb Riechmann in Washington and Sylvie Corbet in Biarritz, France, contributed to this report.