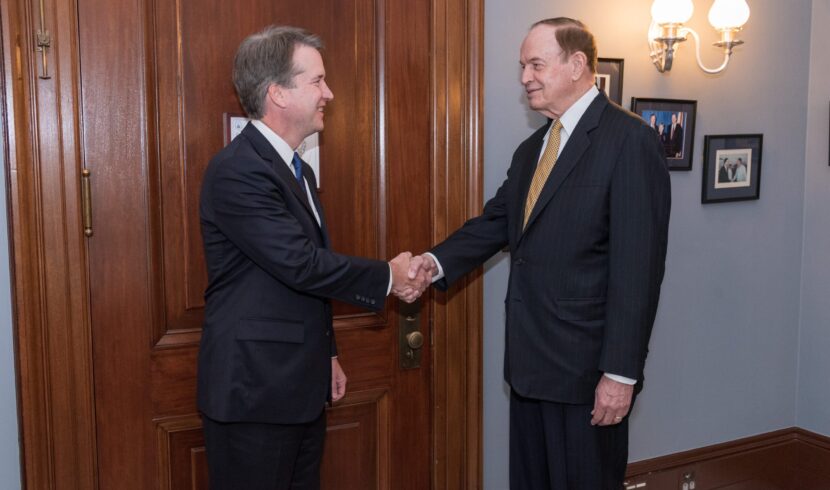 The battle over Judge Brett Kavanaugh’s nomination to the Supreme Court is heating up in Washington.

President Donald Trump selected Kavanaugh in May in what most believed to be a “slam dunk” pick given the judge’s non-controversial record and Republicans’ control of the Senate. Since then, Senate Democrats have been working to derail the nomination or at least delay it. Their latest tactic is to insist that the confirmation process cannot go forward until records from Kavanaugh’s work as Staff Secretary in the George W. Bush White House are released and reviewed. Republicans counter that the files and records released on Kavanaugh so far already amount to the most of any Supreme Court nomination in history.

Senate Republicans had been hoping to confirm the new justice in September before the Court convenes to consider new cases. It is doubtful Democrats will have the votes to stop Kavanaugh from being confirmed, but, by sparring over documents and dragging out the process, they could successfully delay the confirmation into October, frustrating Republicans.

However, Senate Democrats might want to be careful what they wish for. A Senate vote on President Trump’s Supreme Court nominee in mid-to-late October would have major political implications for several Senate Democrats up for reelection this year: Sen. Claire McCaskill in Missouri, Sen. Bill Nelson in Florida, Sen. Heidi Heitkamp in North Dakota, Sen. Joe Donnelly in Indiana, and Sen. Joe Manchin in West Virginia. Voting against confirming Trump’s nominee to the Court would alienate conservative voters as well as some moderates, while voting to confirm Kavanaugh would infuriate the liberal base. A tough spot to be in either way, and the closer the vote is to the election the greater the pressure will be from both sides.

One red state Senate Democrat who doesn’t have an election this year is Alabama’s Sen. Doug Jones. Jones is taking a deliberate approach to the Supreme Court nomination, not signaling how he might vote one way or another. I recently sat down with Jones during a visit he made to Montgomery and we discussed the situation. He is declining to meet with the nominee in person until after the confirmation hearings because Jones wants to study Kavanaugh’s answers to better inform his own conversation.

That’s a departure from his colleagues who are fighting the nomination, like Sen. Cory Booker who likened confirming Kavanaugh to being “complicit in evil” and Sen. Kamala Harris who said the confirmation could lead to “the destruction of the Constitution.”

Sen. Richard Shelby wasted no time meeting with Kavanaugh and offering the judge his full support.

“After speaking with Judge Brett Kavanaugh, I am confident that he is principled, intelligent, and a steadfast supporter of the rule of law,” Shelby said after their meeting. He went on to say that confirming Kavanaugh “is one of the most important things we will do during this Congress.”

That’s saying a lot for the Chairman of Appropriations who is engaged in a historic effort to fix the badly broken federal spending process.

It also surely adds to the pressure on Jones, not that he needed any more of it. The Judicial Action Network is running television and radio ads aimed to ramp up the pressure on Jones and other possible swing votes. The group released a public opinion survey that showed Alabama voters favored confirming Kavanaugh by a 54 to 32 percent margin.

Jones told me he’s “not worried about the ads” and that the Judicial Action Network is “really wasting their money.”

Fair enough. I’ll take Jones at his word that he’s not thinking about the politics on this vote. A lot of Republicans are, though, and the ones interested in challenging Jones in 2020 are watching very closely.

Congressman Bradley Byrne is openly talking about challenging Jones. State Senate Pro Tem Del Marsh, former Alabama Supreme Court Justice Glenn Murdock and Congressman Gary Palmer are also said to be considering a run in 2020. You can bet whomever Republicans nominate would love to have Jones vote against Kavanaugh so they can use it against him on the campaign trail.

In all likelihood, Republicans will have the votes to confirm and the Democratic leadership will have no problem with Jones and other red state Democrats voting as they please. However, if things get tight and Democrats have actually have a chance to block this nomination and score perhaps their biggest victory yet in the Trump era, Jones and his colleagues will begin to feel the heat from Minority Leader Chuck Schumer and the liberal base.

That would be a tough vote. But, that’s what you sign up for when you run for the U.S. Senate.

Todd Stacy is the publisher of the Alabama Daily News. His 15-year career in Alabama politics spanned from the State House in Montgomery to Capitol Hill in Washington, D.C. Subscribe for free to his daily political news and analysis at www.ALDailyNews.com.