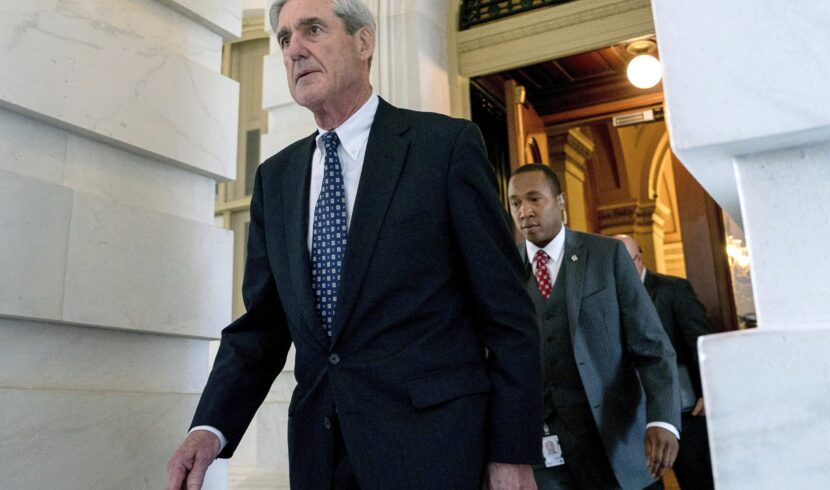 WASHINGTON (AP) — A former Trump campaign aide spent much of the day promising to defy a subpoena from special counsel Robert Mueller, even throwing down the challenge to “arrest me,” then backed off his defiance by saying he would probably cooperate in the end.

In an interview Monday night with The Associated Press, Sam Nunberg said he was angry over Mueller’s request to have him appear in front of a grand jury and turn over thousands of emails and other communications with other ex-officials, among them his mentor Roger Stone. But he predicted that, in the end, he’d find a way to comply.

“I’m going to end up cooperating with them,” he said.

It was a reversal from his tone throughout the day, when he lashed out at Trump and his campaign and threatened to defy Mueller in a series of interviews.

“Why do I have to do it?” Nunberg told CNN of the subpoena. “I’m not cooperating,” he said later as he challenged officials to charge him.

In the earlier interviews, Nunberg said he thought Mueller may already have incriminating evidence on Trump directly, although he would not say what that evidence might be.

“I think he may have done something during the election,” Nunberg told MSNBC of the president, “but I don’t know that for sure.” He later told CNN that Mueller “thinks Trump is the Manchurian candidate.” A reference drawn from a Cold War novel and film, a “Manchurian candidate” is an American brainwashed or otherwise compromised to work on behalf of an adversarial government.

“I definitely think he doesn’t know that for sure because he’s incorrect. As we’ve said many times before, there was no collusion with the Trump campaign,” Sanders said. “He hasn’t worked at the White House, so I certainly can’t speak to him or the lack of knowledge that he clearly has.”

Nunberg also said he thinks former Trump foreign policy adviser Carter Page, a key figure in the Russia investigation, worked with the Kremlin. “I believe that Carter Page was colluding with the Russians,” Nunberg said on CNN. “That Carter Page is a weird dude.”

Page called Nunberg’s accusations “laughable” in a comment to The Associated Press.

The Justice Department and FBI obtained a secret warrant in October 2016 to monitor Page’s communications. His activities during the presidential campaign that raised concerns included a July 2016 trip to Moscow.

In the interviews, Nunberg said he believes the president probably knew about the June 2016 Trump Tower meeting between his eldest son, top campaign staff and a team of Russians, which Trump has denied. And he blamed Trump for the investigation into Russia meddling, telling MSNBC that he was “responsible for this investigation … because he was so stupid.”

A spokesman for the special counsel’s office declined to comment.

During his afternoon tirades, Nunberg detailed his interview with Mueller’s investigators, mocking them for asking such questions as if he had heard Russian being spoken in Trump Tower. He then said he would reject a sweeping demand from Mueller for communications between him and top Trump advisers.

“I think it would be funny if they arrested me,” Nunberg said on MSNBC.

Nunberg said he’d already blown a 3 p.m. Monday deadline to turn over the requested communications. He said he’d traded numerous emails a day with Stone and former White House chief strategist Steve Bannon, and said spending 80 hours digging through his inbox to find them all was unreasonable.

But in his call with the AP, Nunberg said he might be more willing to comply if Mueller’s team limits the scope of its request.
“I’m happy if the scope changes and if they send me a subpoena that doesn’t include Carter Page,” he said, insisting the two had never spoken.

He also said he believes the only reason he’s being asked to testify before the grand jury is to provide information that would be used against Stone, a longtime Trump adviser, which he says he won’t do.

Nunberg is the first witness in the ongoing federal Russia investigation to openly promise to defy a subpoena. But he’s not the first to challenge Mueller: Former Trump campaign chairman Paul Manafort filed a lawsuit in January challenging Mueller’s authority to indict him.

It’s unclear how much Nunberg would know about the inner workings of the Trump campaign or the White House. He never worked at the White House and was jettisoned from the Trump campaign early on, in August 2015, after racist social media postings surfaced. Trump filed a $10 million lawsuit against Nunberg in July 2016, accusing him of violating a nondisclosure agreement, but they settled the suit one month later.

“This is not Mr. Nunberg’s decision, and he will be in criminal contempt for refusing to show up. He can take the Fifth Amendment. But he can’t tell the grand Jury to get lost. He’s going to lose this fight.”

Nunberg appeared pleased by his performance, telling the AP that he was “doing something I’ve never seen.”
“They don’t know what’s going on,” he said, speculating that Mueller would not appreciate his comments and suggesting the authorities might send police to his apartment.

His usual cockiness, however, did appear, at times, to ebb. At the end of an interview with CNN’s Jake Tapper, Nunberg asked whether the TV anchor thought he should instead cooperate with Mueller.

“If it were me, I would,” Tapper responded, telling Nunberg: “Sometimes life and special prosecutors are not fair, I guess.”