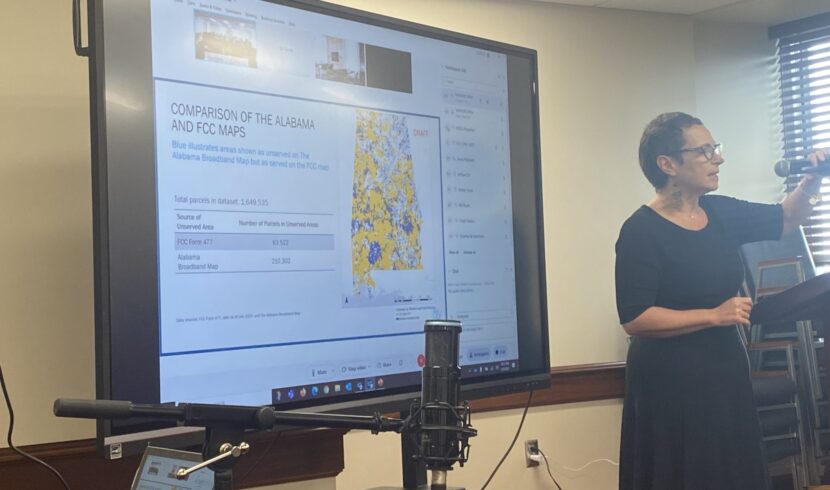 MONTGOMERY, Ala – For the first time, Alabama has a map that shows down to individual addresses where in the state there lacks proper broadband connectivity.

The state-of-the-art map was shown publicly at a meeting of the Alabama Digital Expansion Authority on Thursday. It’s the result of a multi-year effort to gather the most accurate information about broadband availability across the state in order to create a state-wide connectivity plan.

“Alabama may be at the bottom of the list for many things, but right now we are No. 1 when it comes to being able to deploy this plan,” said Sen. Clay Scofield, who chairs the authority.

The map will eventually be available online for anyone to view in the coming weeks after it has gone through a final review process with the internet service providers. It will show various data points like connectivity speeds, what types of technology are deployed and what areas have received grants to pay for broadband infrastructure.

This means about 19% of the state does not meet what is expected to be the new standard federal requirement for being “served” in broadband connectivity.

The Federal Communications Commission’s current definition of “served” is 25/3 Mbps, but there is a broad agreement among federal leaders that that definition is outdated.

Hovis recommended that the state make the 100/20 Mbps the minimum state standard but Sen. Clay Scofield, R-Guntersville, who chairs the joint authority said he would like to see it be 100/100 Mbps during the meeting.

The FCC also has its own map of where in Alabama people are unserved but it is much less detailed compared to the new state-created map.  Based on the new map, Hovis said that the cost to reach all those unserved areas will cost around $4 billion to $6 billion. She said the wide range of possible costs is due to a number of different contingencies like supply chain issues, labor availability and inflation pressures.

The reason for the high cost is also reflective of what is truly needed to not only catch up to basic standards but also “future proof” the state, Hovis said.

“This is not the cheap and quick version of broadband,” Hovis said. “This is the long term, we have solved this problem for our children’s generation…”

There are two significant bills that Congress has already approved that will likely send millions of dollars to the state that can be used for expanding broadband.

One of those is the American Rescue Plan Act which Hovis said the Capital Projects Fund within the act has allocated $191 million for Alabama. It could be used for broadband.

The Infrastructure Investment and Jobs Act which Congress passed last month allocates at least $100 million for broadband in Alabama. Additional grant money will also be available.

The ARPA funds are expected to be available for broadband uses early next year and IIJA funds sometime next year as well.

State Finance Director Bill Poole also spoke to the authority on Thursday, stressing the importance of setting up a clear plan that takes into account the different opportunities and regulations for funding coming into the state.

“Establishing a clear plan with a clear and critical path that sequences our investments and allows that plan, while it may be fluid in its preparation right now, but allow that plan to guide how and when we allocate funds to the different components,” Poole said.

The goal that Hovis suggested for the broadband connectivity plan is that in five years the state should be able to cut in half the current broadband gap in rural Alabama with the hope of reaching the majority of areas in the next 10 years.

Some of the recommendations to reach that goal were to create new grant programs for the state, lower matching requirements for internet service providers and make sure the broadband map is updated on a regular basis.

The final report is expected to be delivered to lawmakers before the end of the year.

Scofield told Alabama Daily News after the meeting that he plans to introduce a package of bills aimed at helping the Alabama Department of Economic and Community Affairs in continuing its work on the broadband accessibility grants.

“We really need to empower ADECA a little more and with the nature of how fast technology can change, they need to be able to evolve and meet the needs with that,” Scofield said.

He also said the funding of the state’s broadband grant program will be another topic discussed during the upcoming legislative session, as well possibly allocating more ARPA money toward broadband.