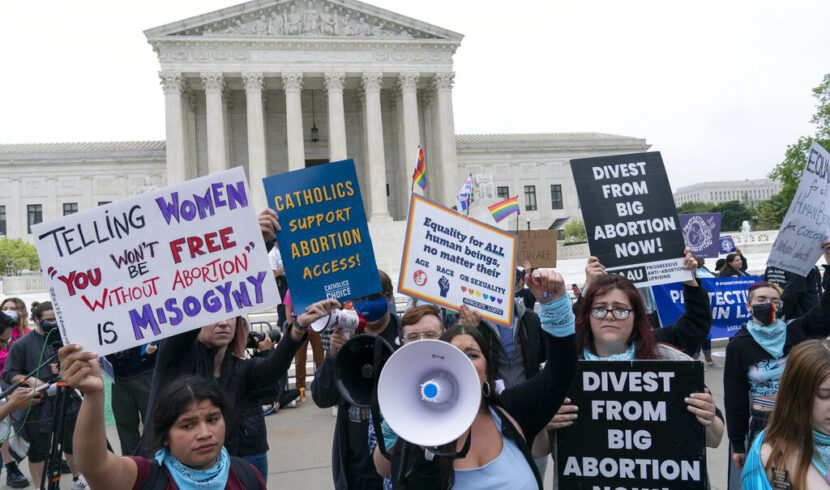 NEW YORK (AP) — A leaked draft of a Supreme Court opinion that would abolish a nationwide right to abortion has thrust major companies into what’s arguably the most divisive issue in American politics.

But while some are signaling support for abortion rights, many want to stay out of it — at least for now.

Experts say it’s tough to navigate these waters. Companies are facing increasing pressure from social media and their own employees to speak out. And while some of them have weighed in on issues like LGBTQ rights, voting rights and gun control, the thorny issue of abortion could prove to be more challenging.

“This is the hottest of the hot potatoes,” said Allen Adamson, co-founder of marketing consultancy Metaforce. “While lots of issues are polarizing, this is ground zero for polarization. People are fanatically passionate one way or another.”

Despite the risks, major companies have waded into the abortion issue in the past. In 2019, more than 180 of them — including H&M, Slack and Glossier — signed an open letter that said restrictive abortion laws were against their values and “bad for business.”

A similar letter was signed by more than 60 companies last year in response to a Texas law banning abortions after roughly six weeks of pregnancy, forcing some women to travel out-of-state to access the procedure. Among others, jeans maker Levi Strauss & Co., the online reviews site Yelp, banking giant Citigroup and ride-hailing company Lyft pledged to cover travel costs for employees who have to travel long distances to access an abortion.

When the report of the draft court opinion set off a political firestorm this week, a few companies issued statements supporting abortion rights but stopped short of taking further action themselves.

“Overturning Roe v. Wade will jeopardize the human rights of millions of women who stand to lose the liberty to make decisions over their own bodies,” Yelp said in a statement. “Turning back the clock on the progress women have made over the past 50 years will have a seismic impact on our society and economy.”

Many others have remained quiet. They include Netflix, PayPal, Microsoft, Patagonia, Target, Walmart and Apple, which is reportedly covering travel costs for its Texas workers through its medical insurance. Microsoft and the Chamber of Commerce, the world’s largest business federation, said it had no comment; the rest did not respond to requests for comment. The Business Roundtable, which represents some of the country’s most powerful companies, said it “does not have a position on this issue.”

Meta, which owns Facebook and Instagram, also did not respond to an Associated Press request for comment, though its chief operating officer, Sheryl Sandberg, posted on her personal social media accounts on Tuesday that the document represents a “scary day for women all across the country.”

Adamson believes that many companies have held off weighing in on the Supreme Court’s draft because they want to wait to see the court’s final ruling.

“This gives companies a chance to think this through,” he said, noting that companies need to make a decision based on what the majority of their employees want.

Over the past few years, companies have added their voices to the Black Lives Matter movement and issues like same-sex marriage. After the Jan. 6 insurrection at the U.S. Capitol, dozens pledged to halt donations to lawmakers who objected to Congress’ certification of President Joe Biden’s victory, promises that turned out to be largely empty.

But taking a stance on controversial issues is seemingly becoming more challenging, oftentimes pitting companies against Republican lawmakers who seem increasingly eager to push back.

Delta, which declined to comment on the abortion issue, was the subject of attacks by the Georgia GOP last year for its opposition to the state’s restrictive voting rights bill. In response, Georgia’s Republican-controlled House voted to revoke a jet fuel tax break that benefits the Atlanta-based company, an effort that ultimately fizzled.

Florida Gov. Ron DeSantis signed a bill last month to dissolve the private government Walt Disney World controls on its property in the state as retribution for the company’s opposition to a new law critics have dubbed “Don’t Say Gay.” On Wednesday, U.S. Sen. Marco Rubio introduced a bill that would prohibit companies from claiming tax deductions for their employees’ abortion travel costs or “gender transition” expenses for employees’ children.

State lawmakers are similarly taking aim at companies that offer help to women seeking abortions in states with less restrictive laws around abortions. Should Roe v. Wade get overturned, roughly half of states are likely to quickly ban abortion.

In March, Texas State Representative Briscoe Cain, a Republican, sent a cease-and-desist letter to Citigroup, saying he would propose legislation barring local governments in the state from doing business with any company that provides travel benefits for employees seeking abortions. If enacted, Cain said the bill would prevent the New York-based bank from underwriting municipal bonds in Texas unless the bank rescinds its policy.

In South Dakota, GOP Rep. Scott Odenbach suggested lawmakers might look at legislation to discourage companies from covering the costs of employees who travel to another state for an abortion, noting that the state’s proximity to Minnesota, where abortion will remain legal even if Roe is undone, raises “cross-border issues.”

David Levine, a professor at UC Hastings College of the Law in San Francisco, said the legality of what states can or can’t do to regulate companies who cover such costs can get murky. He said the easiest thing lawmakers can do is to remove tax breaks offered to companies who cover them.

Businesses face tough choices if they continue to operate in states that legislatively ban abortion, agreed John E. Katsos, a research affiliate at Queen’s University Belfast in Northern Ireland, who consults with multinational companies. Katsos predicted insurance companies would raise the premium rates of companies that operate in such states, because it costs more to insure a pregnant woman and children than to cover an abortion procedure.

Some corporations have long paid for their employees’ travel-related expenses for surgeries out of state under their medical benefits, noted Katy Johnson, senior counsel of health policy at The American Benefits Council, a lobbying group in Washington, D.C. She said she has fielded more interest from companies since the abortion ban in Texas to cover travel expenses for abortion procedures.

State abortion bans might make it harder for companies located in such states to recruit college-educated workers at a time of severe labor shortages, some experts said. That might outweigh any special tax privileges that helped to entice companies to locate there.

“You would rather pay higher tax and have great people than struggle to recruit people to your headquarters in Texas,” said Maurice Schweitzer, a professor at University of Pennsylvania’s Wharton School of Business.

“College graduates will have a lot of choices. And I think there’s going to be a stigma and an aversion to moving to states that have these draconian laws.”
____
Associated Press writers Doug Glass in Minneapolis and Barbara Ortutay in San Francisco contributed to this report.