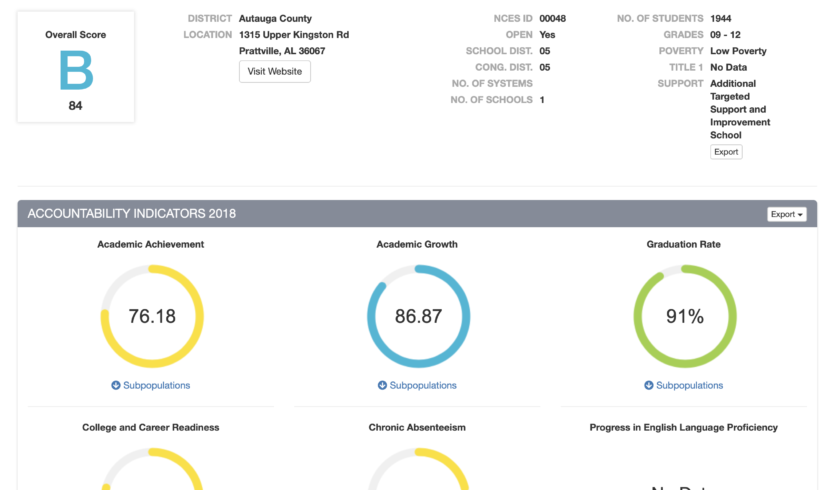 Even though the 2019-2020 school year just began, officials at the Alabama State Department of Education are already discussing their education budget proposals for the fiscal year 2021.

State Superintendent Eric Mackey told reporters that the main goal for this budget proposal is to get more money into classrooms.

“The two big asks we had were for more teachers, making sure that the pay and benefits are good enough to recruit people into teaching and that teachers are well supported in the classroom,” Mackey said.

At the K-12 state board education monthly meeting Thursday, Mackey explained the budget priorities for 2021 include literacy, numeracy and STEM, preparing graduates, teacher quality and quantity and unique populations.

This year, lawmakers approved the Alabama Literacy Act. Its goal is to improve reading skills, it says that starting in 2021-2022 third-graders not reading proficiently can be held back. It also requires schools to conduct summer reading programs for struggling students.

To properly fund the new law’s requirements, an additional $25 million is needed in the 2021 budget, Mackey said

Mackey explained that the summer reading program would cost a little under $4 million each year.

The reading initiative also calls for a certain amount of reading specialists to help with the bottom 5% schools and English language learners. The department estimates that will cost an increase of $4.7 million to what is already allocated.

Funding for professional development for teachers will cost about $4.9 million.

The initiative also calls for a 9-month reading coach in each K-3 school and the department says it needs $15 million more to fully fund that section.

Mackey hopes that when it comes to implementing the reading initiative, all of the focus won’t just be put on the third graders, but catching problems early on to help the students before they reach the third grade.

“Since its by third grade, everyone only wants to talk about third grade, but the real focus needs to be on pre-K, kindergarten and first grade,” Mackey said. “If we can identify which students have learning interferences, what those interferences are and give them tiered support that they need …  by third grade, it won’t be an issue.”

Recruiting and retaining more teachers has been a continued struggle for the Alabama school system, but Mackey is hoping that more classroom financial support and retirement benefits will help.

One of the other larger asks that is in the 2021 proposal is $1,000 per classroom for student materials, up from the current $600.

“One of my passions for as long as I’ve been an educator is to give teachers enough money to buy the stuff they need for their classrooms,” Mackey said during the meeting.

The department also wants to double the professional development amount per teacher from $100 to $200. For textbooks in classroom, they’re asking to increase to $100 from the current $75, which Mackey said hasn’t been increased in years.

Improving retirement benefits to a “Tier III” plan for new educations employees, including teachers and administrators, was also proposed during the meeting.

It is the same proposal that the department gave the legislature last year that would offer more generous benefits than the Tier II plan, which lawmakers created for a scaled-back retiree package in 2013.

Board member Jeffery Newman said during the meeting that fixing the retirement benefits is a major concern for him and something he thinks needs to be addressed soon.

“If we don’t address this we are going to continue to see teacher shortage across the state,” Newman said.

This spring, the House approved the Tier III bill but after it was amended in the Senate to only apply to classroom teachers, it failed to pass the House again.

“I think the Legislature overcorrected and so what we’re asking now is lets that pendulum swing closer to the middle, so we’re not even asking for Tier III be equal to Tier I, but to be better than Tier II,” Mackey told reporters.

A brand new line item that the department is proposing is the High Needs Special Education Grant Program that is used for students who need things like full time nurses or special medical transport.

It would be in lieu of the current “Catastrophic Special Education Support Allocations” line item and Mackey is asking for a $25 million increase for those grants.

Along with increasing the grant amount, the department also want to lower the threshold of who can apply.

Alabama schools’ English language learners population grew from 25,000 to 29,000 in one year. The allocation per student that was given in last year’s budget was $251, but Mackey is now asking that be bumped to $400 per student.

The total increase asked for English language learners would be $4.4 million.

Also during Thursday’s meeting, the department unveiled the new design of the online report card system that allows anyone to look at a school system’s grade letter score, along with a whole breakdown of various achievement indicators.

Mackey said that this new system enables more transparency for the department and is easier to use and find information.

“The data has always been available on the department’s website, but we wanted to make sure it was easy for parents and school administrators to access,” Mackey told reporters.

The site enables comparisons of up to four different school systems side by side. Mackey said that he hopes this new system will be used by parents to “drill down” on the information in order to find the best school for their children.

“What we want people to do is think about, well, if I have a student who may fit in one of these demographic groups let me drill down and see how that school is doing with children like my child,” Mackey said.

The demographic breakdowns of the student population not only look at things like race and economic background but also mention things like student with disabilities, English language learners and migrants.

The federal Every Student Succeeds Act requires every state and district to publish a report card. Prior to ESSA, state lawmakers in 2012 passed legislation requiring the department to assign grades to all schools. That law took several years to implement. Collins sponsored that legislation.

“I’m glad that we’ve got more transparency,” she said Thursday about the revamped site.

Collins said improvements could be made in the grading system, including, as more schools improve, raising the scores required to be an A or B school.

“That could be done by the board to push that continued improvement,” Collins said.

Mackey said that the report card reflecting the 2018-2019 school year will be posted online on Oct. 18, earlier than previous years’ postings.