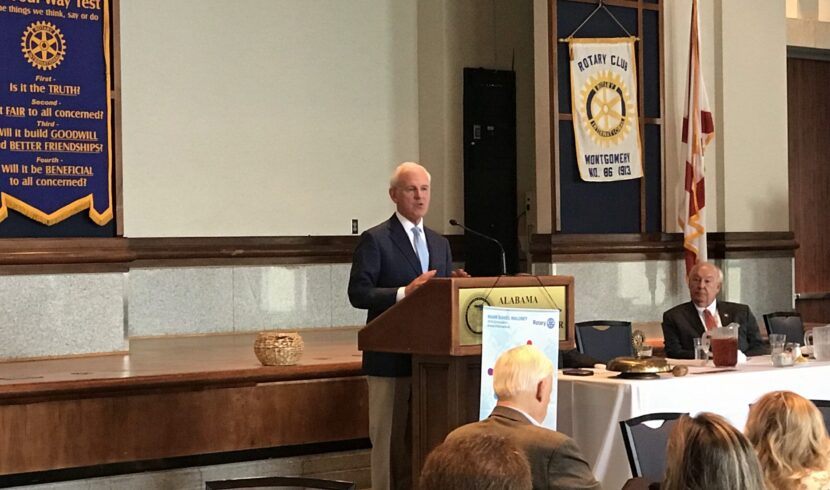 MONTGOMERY, Ala. – U.S. Rep. Bradley Byrne on Monday said he wouldn’t be surprised if the Mobile Bridge Bayway project dies if state and project leaders can’t agree upon a plan and its financing.

“I don’t know if it will be postponed or not. The only reason to postpone it is if we can’t get a plan we can all agree upon.  If we can’t, I would be surprised if it’s not killed,” Byrne told reporters after speaking to the Montgomery Rotary Club.

Byrne, who represents Mobile and Baldwin Counties in Congress and has championed the Mobile Bayway project, said the goal is to avoid having tolls be the principal way the proposed $2.1 billion Interstate-10 project is funded.

The Alabama Department of Transportation has said tolls ranging from $3-$6 one-way would be needed finance the project. Sticker shock at that price, as well as the plan to also toll the existing tunnel under the Mobile River, has sparked opposition in coastal Alabama. However, ALDOT says the project is not feasible without a toll.

A $90 monthly pass for daily commuters has also been proposed as a way for locals and frequent users to save money. But Byrne still sees that as too high, especially when coupled with the six-cent raise in the state’s gas tax starting in September.

Byrne said that he has been working with local officials for the past few weeks to come up with plans for finding alternative ways to fund the project.

“The alternatives are going to have to be a completely different concept from what we are doing right now,” Byrne said.

Specific alternatives are exactly what Gov. Kay Ivey is asking for from those opposing the toll bridge. Ivey recently told Alabama Public Television she had heard enough concerns about the project from critics and now needs to hear if opponents have actual solutions.

“I want some solid good ideas of how we can pay for this bridge,” Ivey said. “That’s the bottom line. We don’t need to know your concerns. We need to know some proposed solutions that are reasonable and can be implemented.”

Byrne mentioned federal grants that the state could take advantage of but did not mention any specifics of the plan he wants to create with local and state leaders.

“It’s a little premature, and I want to make sure that I’m working lockstep with the people down there, but it would be a dramatic shrinking of the plan and some alternatives to the financing that is out there and can be taken advantage of.”

Ivey rescheduled a meeting of the Alabama Toll Road, Bridge and Tunnel Authority for Oct. 7 during which alternative proposals and possible solutions to avoid tolls could be brought forward.

Byrne is one of several Republicans running to challenge Democrat U.S. Sen. Doug Jones in 2020.

When asked what he thought about former Auburn head coach Tommy Tuberville leading in the last internal poll released, he said polling numbers this early in the race aren’t significant. The primary election is in March.

“The vast majority of Alabamians right now aren’t ready to really be paying attention to the race, so I don’t think polls at this point really mean much,” Byrne said. “I’m more interested in what are really the most important things in the minds of the people of Alabama.”

Byrne said his time in U.S. Congress and as the chancellor of the Alabama two-year college system set him apart from other candidates. Alabama Secretary of State John Merrill and former Alabama Chief Justice Roy Moore and State Representative Arnold Mooney, R-Birmingham, are also running.

“No one else has track record of taking a part of government and making it perform its essential functions, while at the same time, cutting out tens of millions in the budget which we had to do because of the recession in the two-year college system,” Byrne said.

He pointed to his work last year in co-authoring a bill with Rep. Jackie Spier, D-California, that updated Congress’ policies on reporting sexual harassment and mentioned his work on the Armed Services Committee that led the way to getting the first-ever audit for the Pentagon.

Byrne was also asked how Congress should react to the ongoing trade wars between President Donald Trump and the Chinese government and said that a deal needs to be reached in order to protect Alabama farmers.

“I think it’s important for all of us in Congress to communicate more clearly to the White House and the U.S. Trade Representative the implications of various tariffs on all industries. But in Alabama, it has particular impact on agriculture,” Byrne said. “The agriculture community in Alabama has been remarkably patient and remarkably forbearing, but that can’t last forever. So it is time for us, if nothing else, to sign a deal on agriculture items with the Chinese.”

On Friday, Trump announced more tariff increases and said he was ordering American companies to stop dealing with China. He said during the Group of Seven meeting this week that serious negotiations with the Chinese would begin soon.