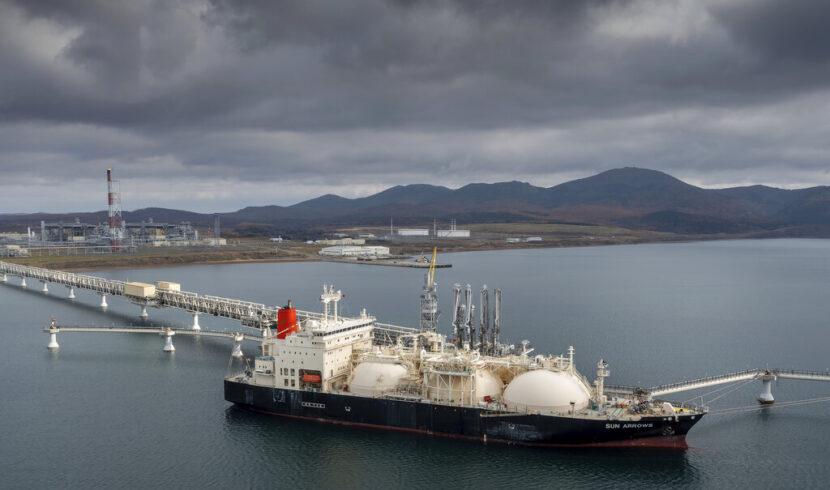 There is a glaring carve-out in President Joe Biden’s sanctions against Russia: Oil and natural gas from that country will continue to flow freely to the rest of the world and money will keep flowing into Russia.

Following Russia’s invasion of Ukraine, Biden defended his decision to preserve access to Russian energy in order “to limit the pain the American people are feeling at the gas pump.” But some academics, lawmakers and other analysts say that excluding an industry at the heart of the Russian economy essentially limits the sanctions and could embolden Russian President Vladimir Putin.

“Energy exports are the whole game,” said Columbia University historian Adam Tooze, an expert on finance and European politics. Politicians in the United States and Europe chose to “carve out the one sector that might truly be decisive. I don’t think Russia is blind to what is going on and it must indicate to them that the West does not really have the stomach for a painful fight over Ukraine.”

As part of a broader international push, Biden announced sanctions on Thursday that target Russian banks and the country’s elites, and restrict the export of vital technologies that are key for the military and economic development. The U.S. and its European allies intensified the sanctions on Saturday by announcing plans to freeze the reserves of Russia’s central bank and block certain financial institutions from the SWIFT messaging system for international payments.

But the rules issued by the Treasury Department allow Russian energy transactions to keep going through nonsanctioned banks that are not based in the U.S. And administration officials stress that the sanctions are designed to minimize any disruptions to the global energy markets.

U.S. crude oil prices closed Friday just below $92 a barrel, right where they were in the days before Russia’s invasion of Ukraine. Still, gasoline prices at the pump are up more than 33% from a year ago to a national average of $3.57 a gallon, according to AAA.

Inflation, at a 40-year peak and fueled in large part by gas prices, has hurt Biden politically with voters heading into the November elections.

The sanctions created a possible trade-off for the president between his political interests at home and abroad.

By invading Ukraine, Russia has potentially fed into the supply chain problems and inflation that have been a crucial weakness for Biden, who now is trying to strike a balance between penalizing Putin and sparing American voters.

Biden specifically highlighted the Russian energy carve-outs as a virtue because they would help to protect U.S. families and businesses from higher prices.

“Our sanctions package we specifically designed to allow energy payments to continue,” he said.

Those domestic politics — which also apply to many European leaders — produced a set of sanctions that Sen. Pat Toomey, R-Pa., on Thursday said he fears “will be inadequate to deter Putin from further aggression.”

“The administration is intentionally leaving the biggest industry in Russia’s economy virtually untouched,” Toomey said. “The sanctions imposed on Russian banks, while welcome, may not isolate the Russian financial system from international activity. That’s why the U.S. should impose crippling sanctions on Russia’s oil and gas sector.”

But Biden also needs to consider the needs of his European allies. Natural gas from Russia accounts for one-third of Europe’s consumption of the fossil fuel. Restricting the world’s largest exporter of natural gas and second-largest exporter of oil, after Saudi Arabia, could hurt the unity that U.S. officials say is key to confronting Putin.

This dependence on Russia could limit the potential devastation of sanctions.

“It would definitely be more damaging to Russia if the energy sector was included in the sanctions package,” Mark Finley, a fellow in energy and global oil at Rice University’s Baker Institute for Public Policy, said in an emailed statement. “Oil royalties & taxes generally account for about 40% of Russian federal government revenues.”

Finley noted that Russia has relied on oil and natural gas revenues in recent years to build its stockpile of foreign reserves above $600 billion, specifically so it could insulate itself from financial sanctions. But that financial cushion may ultimately be at risk from the added U.S. and European sanctions.

Domestic oil and gas companies are dealing with tight supplies of rigs, sand, truckers and laborers needed to drill for oil and gas, said Jen Snyder, managing director at Enverus, an energy analytics firm. She noted that one supplier said its most modern and efficient rigs are all contracted out through the end of the year.

“All these constraints can be bridged, but it takes time,” Snyder added.

Natural gas supplies in Europe have been extremely tight. But gas producers in the U.S. cannot quickly export more gas into the global market. That’s because to ship natural gas overseas, it has to be cooled and converted into liquefied natural gas at LNG export facilities, and in the U.S. those facilities are operating at capacity.

In the face of sanctions over Putin’s 2014 invasion of the Crimean Peninsula in Ukraine, the country’s elites and insider corporations learned to adapt, often transferring their assets into newly created shell entities with a clean record. Those strategies are now being put to the test, though access to oil has been a consistent loophole that other countries in a similar predicament exploited in the past with Russia’s help.

Putin’s government has helped tutor other U.S. adversaries such as Iran and Venezuela on how to circumvent Washington’s controls, said Marshall Billingslea, who helped set sanctions policy for the Trump administration.

“Sanctions enforcement is inherently a cat and mouse game and they’ve had eight years, ever since Crimea, to set up alternative mechanisms to keep hard currency flowing to the regime,” Billingslea said.