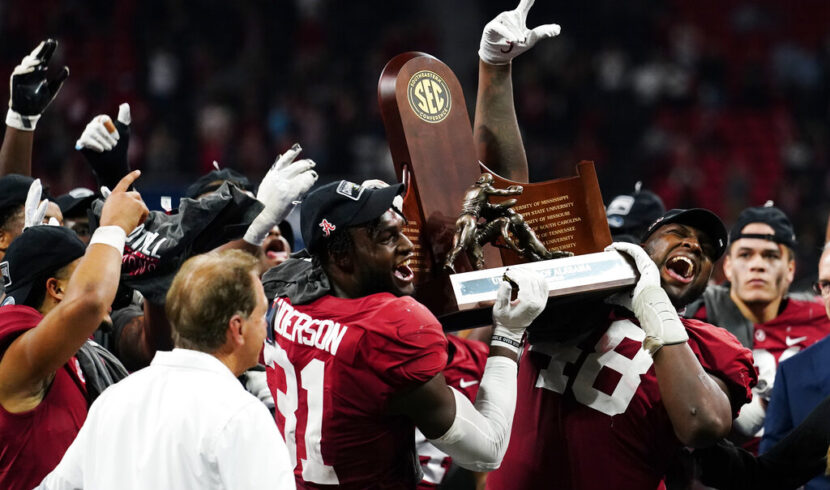 ATLANTA (AP) — Underdog is an unusual role for Alabama.

Turns out, it suits the Crimson Tide just fine.

Now, Nick Saban’s team is in a much more familiar position: getting ready to play for another national title.

Bryce Young carved up the nation’s top-rated defense, throwing for three touchdowns and running for another as the fourth-ranked Crimson Tide rolled over No. 1 Georgia 41-24 in the Southeastern Conference championship game Saturday.

The stunning result sent both powerhouse programs into the four-team College Football Playoff.

For Alabama, it is the seventh appearance in the eight-year history of this postseason format, but this might the most unlikely one of all given the way the Tide struggled late in the regular season.

Saban made sure his players heard all the skeptics.

No one lapped it up more than Young, who set SEC championship records with 421 yards passing and 461 yards total offense.

Coming off a surprisingly difficult, four-overtime win over Auburn and already saddled with a loss, the Tide knew they needed a victory to ensure a return to the playoff.

The reigning national champions gave Saban a chance to add to his record seven titles — six of them coming since he arrived in Tuscaloosa in 2007 to lead a storied program that has become perhaps the greatest dynasty in college football history.

“The resiliency they’ve shown all year makes this so special,” Saban said. “Winning the game as we did last week, playing a game today to a level that most people probably didn’t expect, I’m really proud of this bunch. They’ve shown tremendous ability to overcome adversity all year long.”

Georgia (12-1, No. 1 CFP) cruised through the regular season, barely challenged and a unanimous choice as the nation’s No. 1 team for the past two months. The Bulldogs boasted a fearsome defensive unit that had allowed only 6.9 points a game.

Young made that vaunted defense look like a scout team, earning game MVP honors, bolstering his Heisman Trophy chances and moving on to an even bigger game on the final day of 2021.

“He’s soooo good at avoiding the rush,” Georgia coach Kirby Smart said. “He buys time with his mobility and makes plays downfield. Give him credit. He did a tremendous job.”

The playoff field will be announced Sunday, with the semifinals set for the Orange and Cotton bowls on Dec. 31.
Alabama (12-1, No. 3 CFP) had six offensive scoring drives — five covering at least 75 yards, the other 62 — and finished with a staggering 536 yards against a team that was giving up just under 231 per game.

The Tide’s defense wasn’t too shabby, either, essentially sealing the victory with Jordan Battle’s 42-yard interception return to the end zone with about 12 minutes remaining.

Georgia’s Stetson Bennett threw for 340 yards and three touchdowns, but he also had two crucial picks. Freshman Brock Bowers made 10 catches for 139 yards.

This one will be remembered for Alabama’s dismantling of the Georgia defense, which had not allowed more than 17 points in a game during the perfect regular season.

“We didn’t play our best game,” linebacker Nakobe Dean said. “We’ve got a lot to work on.”

After falling into a 10-0 hole on the first play of the second quarter, Alabama outscored the Bulldogs 41-14 the rest of the way. Not even a knee injury that knocked top receiver John Metchie out of the game just before halftime — and likely ended his season — could sidetrack the Tide.

Jameson Williams more than picked up the slack for his injured teammate, finishing with 184 yards on seven receptions and two touchdowns. Metchie had six catches for 97 yards and a TD before his injury.

Young set the tone during a dominant second quarter, guiding four straight scoring drives — three of them for touchdowns — to give the Tide a 24-17 lead at the break.

The quarterback set an SEC championship game record for first-half passing yards with 286, sparked by a 67-yard touchdown pass to Williams — the longest play the Bulldogs have given up this season.

Young was just getting warmed up.

He zipped one to Metchie for a 13-yard score, drove the Tide into position for Will Reichard’s 33-yard field goal, and capped off his brilliant quarter by running 13 yards for a TD with just 26 seconds left in the half.

In a single quarter of football, Alabama put up more points on Georgia than any team had all year, also becoming the first to score more than two TDs in a game against the Bulldogs.

During the regular season, Georgia allowed only 29 points — in all 12 games combined — in the first half.
Alabama took the second half kickoff and quickly added to its lead. Williams hauled in another long scoring pass from Young, this one covering 55 yards.

“He’s elite at the getting the ball to his playmakers,” Smart said.

Smart, a former defensive coordinator at Alabama, continues to be stymied by his former boss.

Smart dropped to 0-4 against Saban, with three of those losses coming in huge games at Mercedes-Benz Stadium in Atlanta.

During the 2017 season, Alabama beat the Bulldogs in overtime in the national championship game. The next year, the Tide prevailed in another classic to capture the SEC championship.

And now, yet another setback for Smart with the conference title on the line.

Georgia: This could be a devastating blow to the psyche of a team that had looked unbeatable most the season. Smart will need to do the best coaching job of his career over the new few weeks to restore the Bulldogs’ confidence.

Alabama: Few gave the Tide much of a chance after their lackluster showing in the Iron Bowl, but the offensive line looked like an entirely different unit against Georgia’s massive front. Young had plenty of time to throw, and he took advantage of it. “All the success we’ve had this year starts up front,” Young said. “They did an amazing job. They really stepped up to the plate.”

Depending on the playoff seedings, the SEC behemoths could be headed for a rematch in the semifinals. It would be the second time the league has placed two teams in the playoff, the other coming in 2017 when Alabama beat Georgia in that overtime thriller.