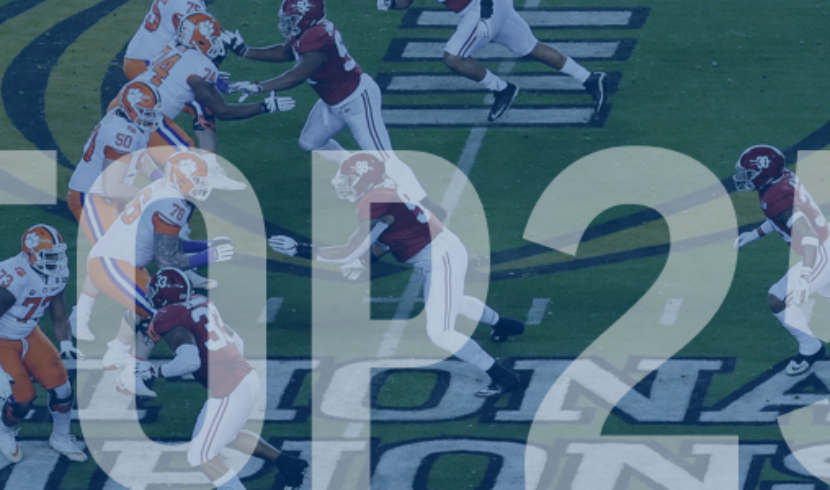 Navy moved into The Associated Press college football poll at No. 25, giving the American Athletic Conference four ranked teams, more than all but the Big Ten and the Southeastern Conference.

With nine ranked teams off this weekend, including four of the top five, there was little movement throughout the AP Top 25 presented by Regions Bank. LSU is No. 1 for a second consecutive week and Alabama is No. 2. The Tigers and Crimson Tide on Saturday will play the first regular-season 1-2 game since the same two did it in 2011.

Navy joins fellow AAC members No. 17 Cincinnati, No. 19 Memphis and No. 23 SMU in the Top 25. Four ranked teams matches a high for the 7-year-old American, which was born from the collapse of the Big East.

“UCF was the top vote-getter outside the Top 25,” AAC Commissioner Mike Aresco said Sunday. “It think it validates what we’ve been trying to do. Our goal is depth.”

Aresco has pushed for the American to be considered along-side the Power Five, branding the AAC a P6 conference.

“It shows that the conference continues to make progress,” he said.

Georgia jumped two spots to No. 6 after beating Florida in the weekend’s biggest game. The Gators slipped four spots to No. 10.

Since the selection committee started ranking teams around this point in the season, only last year did it have the same four teams in the top as the AP poll that was released two days earlier. And never has the first CFP rankings’ first four matched the preceding AP top four.

Appalachian State was the only team to fall out of the rankings this week. The Sun Belt Conference’s lone representative lost for the first time this season, falling at home to Georgia Southern on Thursday.

The American also had four ranked teams on Nov. 8, 2015 (Houston, Temple, Navy, Memphis). The Midshipmen are ranked for the first time since 2017 and already have more than doubled their win total from last season’s disappointing 3-9 finish.

No. 1 LSU at No. 2 Alabama. A playoff eliminator? Or is this just for seeding?
No. 5 Penn State at No. 13 Minnesota. Coach P.J. Fleck’s unbeaten Gophers could row the boat right into playoff contention.
No. 19 Iowa at No. 18 Wisconsin. Huge game in the Big Ten West.

(Note: sometimes the graph shows up better in browser “read mode” or when viewed horizontally on a smart phone)