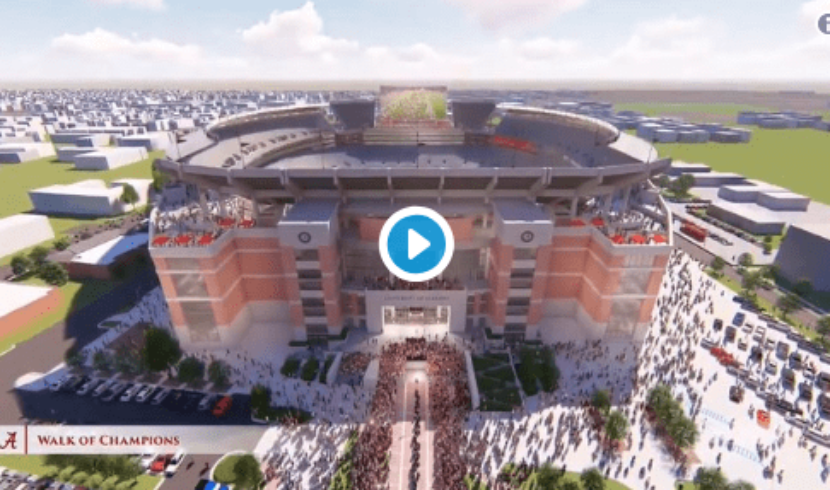 TUSCALOOSA, Ala. (AP) — Alabama is planning extensive renovations to Bryant-Denny Stadium and Coleman Coliseum, reducing capacity at both venues but adding premium seating.

Athletic director Greg Byrne said Thursday that the stadium will “most likely” go from 101,821 seats to sub-100,000, with a massive video board going up in the South end zone that will eliminate some seating and two new video boards opposite.

Renovations at Bryant-Denny Stadium are targeted to begin after the 2019 season with a total estimated cost of $288 million, Byrne said. The changes would be implemented in phases and include adding 3,826 premium seats and a tunnel into the stadium for players making their pre-game entrance through the Walk of Champions.

Alabama also plans to renovate the locker rooms and recruiting lounge and concourses, enlarging the entrance areas and putting in new restrooms and concession stands.

“I think people try to emulate what we do on the field, off the field, so I think to continue to be proactive and progressive in the future is only going to help us keep the kind of standard relative to everybody else that we need to have continued success,” football coach Nick Saban said.

Alabama has already received commitments for $143 million toward a 10-year, $600 million fundraising campaign, including a $1 million gift from Nick and Terry Saban.

The Tide has won five of the last nine football national championships and remains a huge draw. But attendance at the FBS level was down overall last season by 1,409 fans per game, according to the NCAA. CBS Sports reported it was the largest year-to-year decrease since 1983.

Byrne said Coleman Coliseum renovations are projected at $115 million and could begin after the 2021-22 season. He said that figure was some $70 million less than the cost of building a new arena to replace the 50-year-old building.

He expects a drop down to 9,500 to 10,000 seats, which would represent a cut of 5,000-plus. Byrne said men’s basketball coach Avery Johnson ran a lap around his office the first time he saw a picture representing the planned changes.

“The top of the arena’s going to be dramatically closer to the center court than what we currently are,” Byrne said. “It will be a much more intimate, much better experience for our fans. Probably since the day I got here, I’ve been asked by a lot of people, ‘We’ve got to build a new arena, we’ve got to build a new arena.’ And it just did not make sense once we studied it.

“We absolutely feel that renovating Coleman is the right thing to do for the long-term, for the next 30-40 years.”

Alabama also plans renovations of the athletic building, which includes football and administrative offices, and facilities for other sports.
___
More AP college football: https://apnews.com/tag/Collegefootball and https://twitter.com/AP_Top25