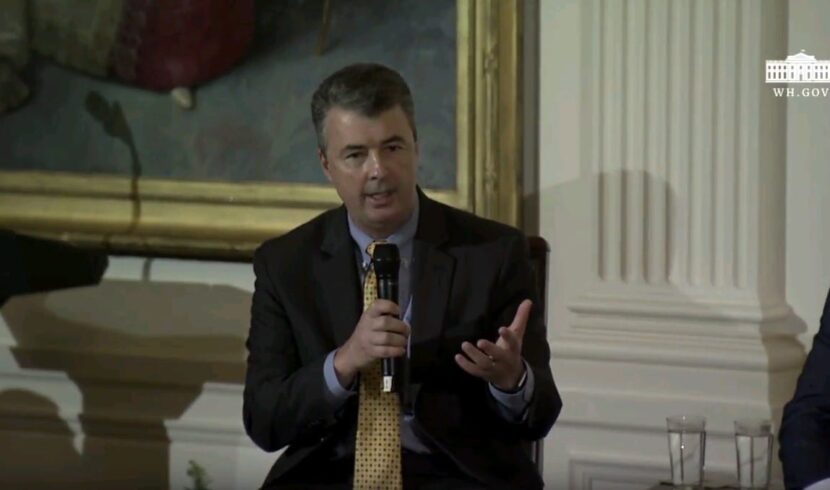 It was part of a special White House event to honor federal Immigration and Customs Enforcement (ICE) and Customs and Border Protection (CBP). Those agencies and their officers have been under increased scrutiny and political attacks from the left, with even some high-level democratic lawmakers calling for their abolishment.

Each emphasized how securing the nation’s borders was a matter of national security, not just to prevent illegal criminal immigrants from possibly inflicting violence in America but to also stop the flow of illegal drugs from entering the country as well.

Marshall spoke about Alabama’s situation in regards to drug trafficking problems in part because of its geographical location between Georgia and Texas.

“Due to our state’s proximity to Atlanta, a major distribution point for drugs, and to Texas, a border state, Alabama has become a prime transit point for drug trafficking,” said Marshall.

“We see marijuana, cocaine, meth, and now illicit fentanyl coming into our state as a result. The drug trade brings dangerous and violent illegal aliens into Alabama.”

The panelists also spoke out against sanctuary cities and Marshall even made the comment that those cities only create a “safe haven” for criminals and funds should be withheld from those cities that participate.

One especially memorable comment came from Perdue said that those lawmakers who would advocate for the abolishment of ICE or the CBP were “unconscionable” to him as well as “downright unpatriotic and treasonous.”

Marshall was asked the same question, to which he said an “amen” to everything Perdue just said and went on to say those who would call for ICE’s abolishment clearly don’t have a proper understanding of what they do to keep the nation safe.

When asked what recommendations he would give to fix the immigration system, Marshall said that it is up to Congress ultimately to help fix the situation we are in now.

“Unfortunately it’s with congress. Much of what law enforcement is criticized for right now is for enforcing the laws that exist. That’s our mission, that’s our role and that’s what we are going to continue to do as long as we can wear that badge and say we are going to protect and serve,” Marshall said.

He went on to say that if there were more senators like Perdue, the nation would be better off and that lawmakers need to stop criticizing ICE and CBP officers who are protecting the border and instead stand behind them for their work in cutting down the drug problem in America.

All thanked ICE and CBP officers for their work in protecting the nation’s borders and to also speak on the efforts both federally and state-wide that they felt still need to be done too secure America’s borders.

The event also came at a time where President Trump and Attorney General Jeff Sessions’ “zero tolerance” immigration policy has come under intense fire after young children were split apart from their families at the border this summer.

Recent reports show there are still 565 children in federal custody and who have not been united with their families who brought them across the border.

Vice President Mike Pence then made short remarks thanking the officers in the room and then gave the podium over to President Trump.

Even though talking about immigration reform has been one of President Trump’s main speaking points in his political life, there were a few flubs during his speech that people watching made sure to note.

Throughout his speech, Trump refered to the Customs and Border Protection officers, or CBP, as CBC. Then Trump remarked that one American CBP officer, Adrien Anzaldua, who helped save 78 illegal immigrants lives who were being locked in a trailer by an illegal human smuggler, “speaks perfect English.”

President Trump was also tough on Congress in his remarks. He spoke about having to deal with “politics” in order to get his immigration reform passed.

Trump said that he would be willing to side with Democrats if he thought it was the right thing to do and then made the comment that he doesn’t side with any one party just moments after claiming all Democrats just want to abolish ICE and are okay with crime.

The president came back to say he hopes congress will go further in helping protect America’s borders and thanked all of the ICE and CBP officers in the room.